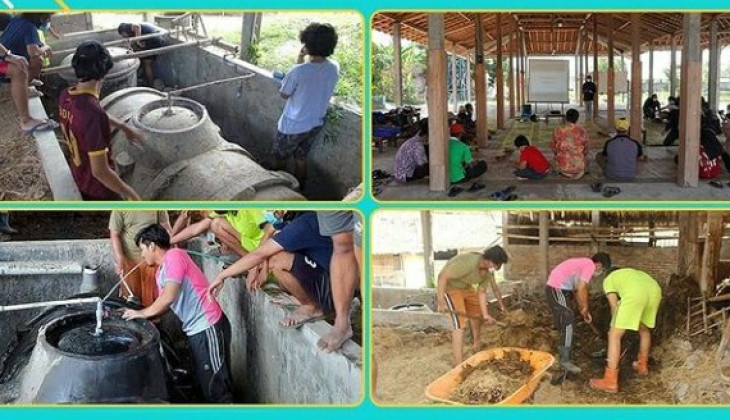 Head of UGM DEM, Melchior Raka Daksattama, said that the empowerment of Energy Village has the vision to create a pilot village for energy resilience in Indonesia by optimizing existing potentials. The village empowerment team, consisting of students from various departments and faculties at UGM, in collaboration with the UGM Department of Sociology, UGM Center for Energy Studies, and Andromeda, seeks to build sustainable agriculture based on new and renewable energy together with the village community.

“This village empowerment project is mainly focused on using new renewable energy hybrid technology to improve the quality of animal feed and quality local fertilizer production. This program is an effort to realize sustainable agriculture through the use of cow dung in Tamanmartani Village based on biomass energy and solar energy,” he explained on Tuesday (27/10).

The biomass energy comes from livestock manure in the cage with Dusun Cageran. Meanwhile, solar energy is obtained by using solar panels on the roof of the shared cage. This livestock manure will be stored in a biodigester to produce methane gas and liquid fertilizer. Then, methane gas will be processed simultaneously with energy from the sun to turn on the water heater and produce hot water for temporary animal feed. On the other hand, the liquid fertilizer will be used as residents’ income resource.

Melchior said Dusun Cageran was chosen to be the focus in implementing the Energy Village Empowerment Program (PDE) of UGM DEM because it has much energy potential, ranging from livestock and agriculture to equipment. Livestock in Dusun Cageran is integrated into one common cage containing 77 cows. In this shared cage, a biodigester was installed, a device that can convert cow dung into biogas and bio-slurry.

“In the past, residents used biogas to heat water as a mixture of animal feed, while bio-slurry had not been used optimally. Unfortunately, the management of the biodigester stopped two years ago, so residents stopped getting benefits,” he said.

In addition, he continued, Cageran has another potential in the form of solar panels and micro-hydro. However, these tools should be improved because they have not been used for a long time.

The social conditions of the community also have potential because the community is very supportive, communicative, and cooperative. This hamlet has an institution that manages the common cage, but it has become less effective due to managerial problems.

Furthermore, Melchior conveyed that the superior programs developed were divided into three focuses, social, technical, and publication. Several programs run by the community social team include program socialization, education, managerial system development, and the collective cage group organization. On 29 August 2021, the outreach team has successfully implemented the first socialization and education program. The next program is a discussion with the shared cage group for group managerial discussions.

The technical team has succeeded in optimizing the existing biodigester generator. On 2 October 2021, a symbol of the inclusion of animal manure in the biodigester was carried out for the first time together with livestock community groups. Next, they will carry out the reinstallation of solar panels.

Meanwhile, to disseminate the programs that have been implemented, the publication team has carried out publications to social media from the UGM DEM Energy Village on Instagram with the username @desaenergi and LinkedIn Desa Energi. They will also create a video podcast which will also be published on the Instagram account. So far, the publication team has published after-report programs, after-movies, infographics about villages, and made short reports of activities from August to October.

Melchior explained that the sustainability plan of the Assisted Village program is the formation of the Srawung Energi Community aiming to continue the program carried out in the common cage. This is manifested in a managerial mechanism between the people involved in the community, and thus there is a clear division of tasks.

They also plan to make Dusun Cageran an educational park tourism village for the following years. The concept of a tourist village is a place to support energy learning facilities for the village community itself and outsiders. Therefore, later it can improve the image of Dusun Cageran as an energy village.