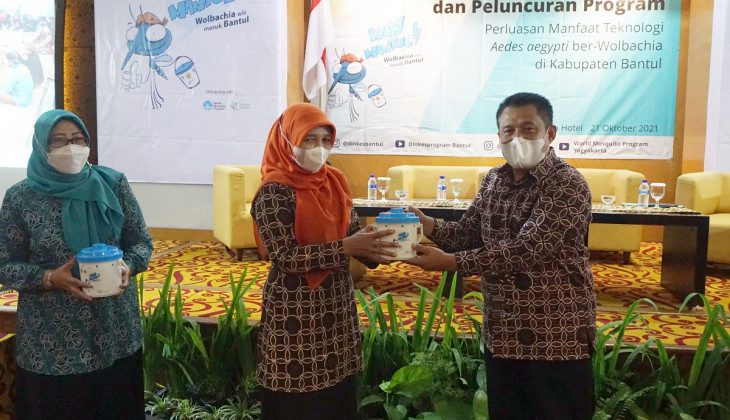 Head of Bantul Health Office Agus Budi Raharja said the initiative aims to improve the quality of public health aside from reducing dengue cases in Bantul Regency. Over the years, scientists have been working on breeding Aedes aegypti mosquitoes that carry the natural bacteria Wolbachia.

Research has proven that these bacteria can suppress the replication of viruses such as dengue, Zika, chikungunya, and yellow fever inside the mosquitoes, thereby reducing their ability to transmit viruses to humans. In research conducted in Yogyakarta City, Wolbachia technology was proven effective in reducing dengue cases by 77% and reducing dengue hospitalization rates by 86%.

Agus explained that 11 sub-districts and 18 health centers in Bantul would participate in this program. The mosquito eggs will be deployed in several public facilities and parent homes (some residents who volunteer to foster the eggs during the 6-month program), with a radius of 50-75 sqm between each release point.

“This program runs in conjunction with other dengue control programs. Hopefully, dengue cases in Bantul will decrease significantly. Extensive collaborations is the key to ensuring this success,” said Agus.

Chair of the Tahija Foundation Trihadi Saptoadi said 400 million people contract dengue every year, which leads to an economic burden for the community. He hopes this program will provide examples for other cities to implement the technology. In addition, Deputy Regent of Bantul Joko Purnomo hopes the Wolbachia technology will help eradicate fatalities caused by mosquito-borne diseases.

“The Bantul Regency government would like to thank UGM and WMP Yogyakarta for all the efforts to develop the Wolbachia technology,” said Joko.

Assistant researcher to WMP Yogyakarta Dr. Riris Andono Ahmad highlighted the security aspect of this technology. According to him, the Wolbachia technology is safe because Wolbachia are natural bacteria that can be found in 60% of insects and can only live inside insect cells. They do not cause disease in humans.