The Direction of Sharia Banking Development 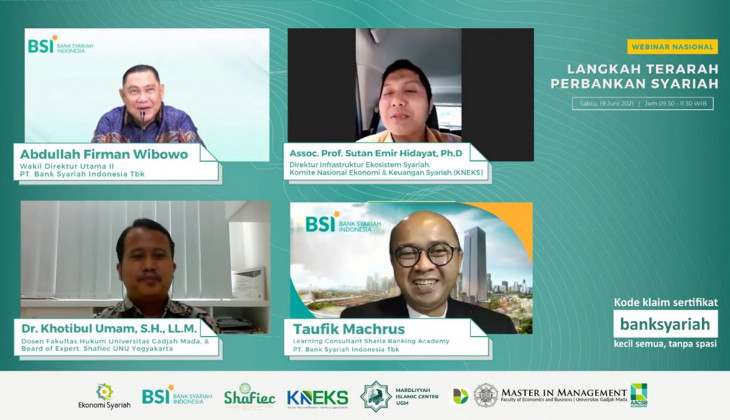 Indonesia is one of the largest Muslim-majority countries. Issues related to banking and riba became the beginning of Islamic banking in Indonesia. Prof. Panut Mulyono, Rector of UGM, explained that the development of Islamic banking needs to be continuously improved at the National Webinar on Directed Steps for Banking on Saturday (19/6).

“Our common challenge is to participate in developing Islamic banking for Indonesia,” he said.

Dr. Khotibul Umam, Lecturer of the UGM Faculty of Law, said that the development phase of Islamic banking can be classified into 3 phases based on the development of regulations and laws in Indonesia, namely introduction, recognition, and purification. The introduction phase, starting with PP No. 27/1992, is about Profit Sharing Banks. In this phase, the Islamic banking system is only a profit-sharing system. Then, in the recognition phase, it is marked by the existence of an economic and monetary crisis. Thus, the primary purpose of sharia banking regulations was to restore public confidence in banking.

“In the banking recognition phase, the complexity of Islamic banking services is higher than the introduction phase,” he added.

Responding to Khotibul Umam’s presentation, Abdullah Firman Wibowo as Deputy Director of Bank Bank Syariah Indonesia (BSI) explained that it is currently entering the purification phase. BSI has three important focuses, namely millennials who will have a role in economic development in Indonesia, digital technology due to the shifting trend to technology-driven, and the halal ecosystem industry in Indonesia. He also explained that Indonesia is targeted to become the center of the Islamic economy in the world in the future.

“Indonesia has considerable potential to become the center of the world’s Islamic economy,” he said.

Confirming Khotibul Umam, Sutan Emir, Director of Sharia Ecosystem Infrastructure, explained that every year Indonesia already has a target for the development of sharia banking, and by 2024 Indonesia is targeted to become a Global Hub for Islamic Economy and Finance.